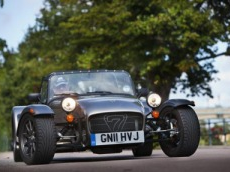 I collected the Caterham 7 Roadsport 175 from their showrooms and service centre. The workshop appears to be staffed by surly mutes who can't smile, nod or respond to a cheery hello. It was only when I returned the car that I realised that this appearance must be down to jealousy; jealousy that another bloody journo was going to have a fun few days with this amazing pocket rocket.

In stark contrast to my first impression I was pampered by reception and given an informative briefing on the dos and don'ts of driving a Roadsport by the very knowledgeable and lovely Emma.

My first mission for the day was to drive up to visit TEAM LOTUS at their headquarters in Hingham,Norfolk. Tony Fernandes owns the Formula 1 team as well as Air Asia, Caterham Cars, the Tune Group and has recently acquired a major shareholding in QPR.

The weather was blustery but in the hope that it wouldn't rain I opted for a top down run, though quite frankly you shouldn't use the hood for anything other than as an overnight cover. I couldn't wait to get off the M25 and the M11 and head onto the A and B roads that would let this car's brilliance shine through. 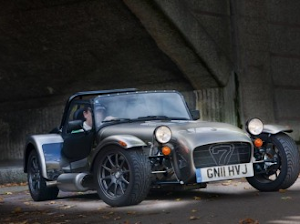 No radio of course, so I was unable to listen to Alan Partridge or pick up the adverts for the A11 road side cafe serving spinal cord in a bap. Who needs a radio when you can listen to that bellowing roar of the 175 bhp Duratec in second and third gears as you take the revs to the limiter. Hit the optional engine start button and click the stumpy gear lever into first. First is short geared, second is where the fun starts. The flickering red light in the rev counter tells you to jettison stage one and ignite the second booster rocket, andthe power rush keeps on coming all the way through to fifth. With nearly 450bhp per ton nothing else on the road gets close. Ferraris, Lamborghinis and 911s look decidedly bloated and slow.

The broader SV chassis, which is still a snug fit, has the wider front suspension of the Superlight. With CAD facilities Caterham has been able to increase chassis stiffness by 12% to cope with the new more powerful engine options. The 2 litre Duratec in both the Roadsport 175 and the R300 is exactly the same. The main difference is that the Roadsport has a five speed box compared to the six speed of the track day car. There's fist fulls of torque and with a feather light 550 kg to push along, the extra gear is not worth having as an option. 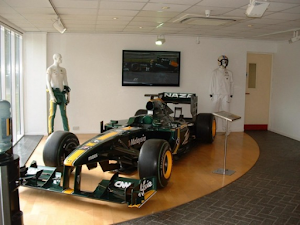 You need to concentrate as the chunky Avon tyres (CR500 195 x 45 R15) will tramline and try to follow white lines like a super model on coke. Give up trying to drive this car; you have to become a part of it. The steering is as sensitive as a single seaters, its sudden darting path as it tracks every contour in the road means that you should flow with the chassis and not fight it or try hanging on grimly to the tiny Motolita wheel.

By the time I turned off the A11 onto the B roads leading to TEAM LOTUS I was part of the car's DNA. I was straight lining fast series of S bends, overtaking two county ladies with head scarves in a drophead Z3 with the staccato blast from the exhaust ricocheting off the high banks. I could still hear them braying in fright as I turned off for the final run into Hingham.

Sunday was a mixture of bright sunshine and thundery showers here in Twickenham. In the wet, treat with caution and unleash the power only when you are facing in a straight line unless of course you like scaring the pants of your passenger. Just allow a little extra space each side for the tail to wag. There's no need to put the roof on as the rain will curve over the top of the screen and with a heater capable of melting your socks you'll feel a warm glow as you blip the throttle to make that dash down the touchline.