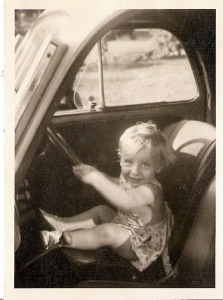 THE LAST TIME I drove a FIAT 500 Topolino was, well, a long time ago as you will see from the picture of me in my mother's 1950s front-engined model. It was equipped with a 569cc four cylinder side valve bursting with 13 bhp.

The stealth fighter coloured Electroclash Grey TwinAir crouching outside the house one early morning last week is something entirely different. This little grenade is equipped with the world's cleanest internal combustion engine, a twin cylinder 875cc producing 85bhp and loads of torque from just 1900rpm. My car had standard 16" black alloy wheels and the optional red leather interior which contrasted beautifully against the sinister grey.

Don't bother asking for a music system upgrade because this engine provides all the sounds that you'll want to hear. At idle it's difficult to know if the engine is on or not and you'll find yourself checking the rev counter for signs of life. Blip the throttle and engage first and that silence becomes a muted growl which grows in intensity and octaves as the little twin heads towards the rev limiter. First and second gear are short with third and fourth giving the legs to the car and fifth there to settle things down at your chosen optimum speed. 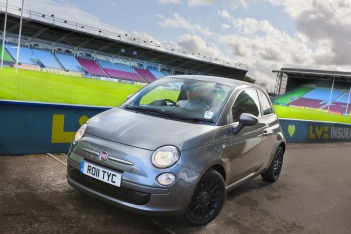 The Fiat 500 TwinAir will reach 62mph in a highly respectable 11 seconds with a top speed of 108mph. On a run from Twickenham to Berkhamstead with Madame, weekend bag and with the rear seats folded flat for a 66kg French Mastiff, I had no problems staying with the Mars bar reps in lane three even if it did mean a drop down to fourth for the occasional hill.

On the dash there's an "eco" button which changes the engine mapping, moving the torque curve down to help the engine run economically and more efficiently as well as shutting it down when stopped in traffic. Pootling around the suburbs in "eco" mode, stereo on and enjoying the sunshine I got just over 70mpg. However, it was not long before temptation got in the way of moderation and the opportunity to spin up the turbo and blatt around the outside of a 911 on the slip road onto the M25 meant that all thoughts of eco driving went out of the window. This car is fun. It's cheeky and it can be driven hard although the consumption figures will take a beating. Turn in fast and deep to a corner or roundabout and it is possible to just lift the inside rear wheel. Broad grin time, even for the old boy in the 911 who gave a cheery wave as he howled past. 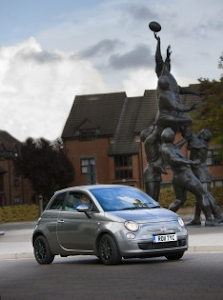 I expected the ride in such a short wheelbase car to be choppy. Wrong again. The ride is a perfect compromise between comfort and firmness which was only disturbed by the oversize speed bumps put in by the muesli crunching Liberal council. I even saw the supposedly intelligent Bamber Gascoigne bumbling along in a G-Wiz, a ten grand tupperware box, and felt like shouting, You could have bought this for a grand more brillo head.

Hopefully my editrix has allowed me my rant and I can continue.

The body hugging red leather seats are comfortable even on a long run while the rear seats are adequate for children or two adults on a short trip. Fiat's brilliant Blue&Me hands free system means you can make phone calls by voice command and listen to an MP3 player. There is provision for an optional TomTom which mounts on the upper dash and communicates with the car's computer telling you where the nearest petrol station is when the fuel level warning light comes on. On this occasion I was using the latest Jeremy Clarkson GoLive 800 series TomTom (see separate review). Geeks will be glad to know that you can download information from the eco Drive onto a USB stick and have your driving style analysed on line.