Aufrecht, Melcher and Grossaspach C43 bi-turbo 4Matic would be rather a mouthful to say nothing of the necessity to word wrap the chrome badge around the car. Mercedes wisely decided to go for AMG C43.

The car was delivered by one of Mercedes’ contracted Class 1 police drivers. I wondered if this might make the traffic boys more sympathetic to any excesses that we might be tempted to get up to on the way to the Silverstone Classic test day. With over 360 bhp from the 3 litre V6, twin turbo and four wheel drive I had hopes of reaching our destination in time for the 10.00 am press briefing despite leaving in the middle of the London rush hour.


The front seats comfortably enveloped us while our lovely American intern, Mariel, had to contort herself into the back seat. My guess is that the rear seat space is not as large as the Beemer 3 series coupé. Well no matter, she was glued to her iPhone texting fellow interns who were slogging away in dull city 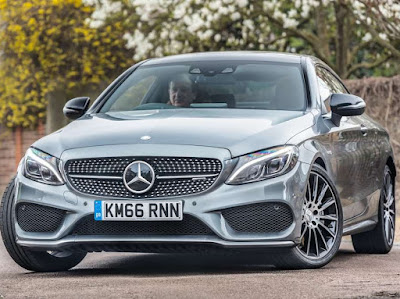 offices and had assured us that she did not get car sick..

Having quietly cruised round the M25 we peeled off onto that sweeping slip road to join the M40. My fellow Zone1Radio raconteur, Jon Mais, had by now decoded what all the various buttons on the centre console were for. Quietly and precisely as if choosing a luxury chocolate Jon selected Sports Mode to stiffen up the suspension, then deftly pressed the loud button for the exhaust which would now crackle and pop at every gear change and at each lift off. The urge to slingshot off the slip onto the motorway meant hitting the downshift paddles five times to get fourth gear to unleash the bahnstormer onto an unsuspecting gaggle of Mars bar reps.

“What is the flashing red triangle in the middle of the speedo?” This was a new one on Jon and with no handbook his first thought was “Go faster and see if 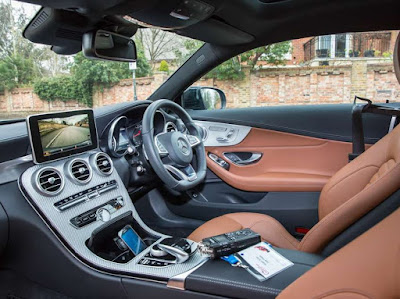 it turns off”. We tried that and it did not work. We rang the man who delivered the car who quietly told us that we were travelling too close to the car in front and that at some point when we got really really close the car would automatically slam the brakes on.

Moments later we were on the A43 to Silverstone. Now we could enjoy the car and push a little. This C43 shares its chassis with the more powerful C53 V8. However, it retains the standard nine speed gearbox as opposed to its bigger cousin’s seven speeder. Without the head up display it would be easy to forget which gear you are actually in. There are a lot of downshifts when approaching a roundabout at speed. We could have left it in Comfort mode and let the car drive itself but that is not the point in this car where you want to barrel into a bend or roundabout making full use of the huge brakes and then power out with the foot hard down. The crackling downshifts are brilliant as is the urgent bark when powering away from a slow corner.

There was a muted request from the back for some music. I opened the window a couple of centimetres and suggested to Mariel that she keep a keen ear on the staccato beat from the exhausts. 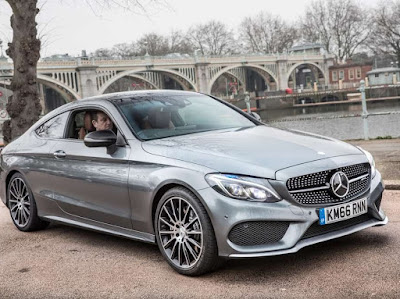 ​​​​​​​We made the press briefing on time. The journey had been fast, fun and comfortable. The C43 had done all we expected from her. This car had nearly £10k worth of extras added to the standard £46k price list and they were all essential and made us feel like a million dollars.

With twin turbo chargers and four wheel drive and a lead foot we expected our wallet to take a hammering, but here again we were pleasantly surprised that we achieved low 20s miles per gallon. If it was driven in a more sedate manner and in Comfort mode then we probably could have got close to the claimed 35 mpg, but that is not the point when you have a car that increases your heartbeat just by looking at it.

My only criticisms are that the steering could do with a little more feel, there are just too many gears (a very low first and very high top) and the rear seat space is somewhat limited. Other than that I would be prepared to sell several close relatives and take out a bank loan to have this beauty on my drive. 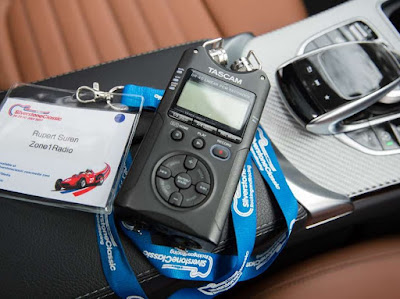